Photo Article: the criminal babes in the wood meet the Orwellian Derbyshire Police

The two charming young ladies committed two heinous crimes yesterday and the Derbyshire Police reacted as you would expect from an organisation drunk on the new powers it has been given by Priti Patel to stop a plague where survival rates in the under 70s are 99.95%. No, the young ladies were not sledging.  No, they were not going for a Big Mac.  Their vile and evil crime was walking in the open air in a socially-distanced manner while holding a cup of coffee. What selfish bitches. Go on Priti, lock ‘em up for good and throw away the keys, you know that you want to.

After being surrounded by Police Officers, Jessica Allen and Eliza Moore were told that driving five miles to take a walk was illegal and that they were not exercising but planning a picnic. Drinking a takeaway coffee is apparently now deemed by the Covid Police to be picknicking. And there was I, thinking that it was just a racist hate crime. Now it is a covid spreader as well. Oi Priti, when are you going to make us all safe and ban coffee altogether?

Jessica and Eliza had driven, in separate cars, to Foremark Reservoir for their walk but a gaggle of Rozzers surrounded them, informed them of their breaches of the law and handed each a fine of £200. The two women now say that they love Big Brother and they know that Big Brother loves them and approves of their public statements that they will walk closer to their homes without holding picnic items in future.  And this is bound to stop the spread of Covid. 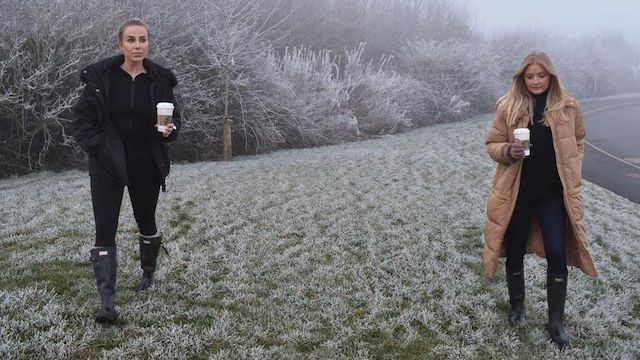