Reasons to #DefundtheBBC No 14 - Katya Adler

Like colleagues such as Daniel Sandford, Ms Adler banks a six-figure salary, plus expenses, funded by extorting £157.50 a year from we plebs whether we watch her fake news or not and she honestly thinks she does a good job. As the BBC’s EU correspondent, she has become utterly embedded in the Evil Empire’s mindset. In the Brexit talks she batted for Brussels. On every glitch, it was always the fault of the evil Britishers and now that we have left she carries on blaming Britain for everything as you can see below.

You may have gathered that there is a bit of a row about vaccines for Covid. The EU ordered from AstraZeneca in a tardy fashion and so only secured its supply on a “best efforts basis.” And sadly there are glitches in supply within Europe so it is angrily demanding that the UK, which ordered its supplies early so on a guaranteed basis, hand over some its stocks. The EU’s position has no basis in law and is ludicrous. It is like you pitching up at a restaurant where every table is taken by folks who have booked and going over to a chap and demanding that you have half of his food just because you say you need to be fed.

Yet if you read Ms Adler’s tweets she says:

“On vaccines. But while the Johnson Government berates the EU.”

This is quite simply a 180-degree perversion of the truth. It is rather like saying that Poland started a war with Germany by invading it. Which, as it happens, is exactly what Hitler did say but that was also an untruth.

Ms Adler is so utterly hostile to Brexit and, in this case, the needs of the British people that she is prepared to push a slam dunk untruth. And if you don’t want to pay for this garbage, the BBC will send the bailiffs round. Katya is possibly the worst BBC News reporter and that is a hotly contested title. Her ongoing gushings of fake news are among the top reasons to #DefundtheBBC. 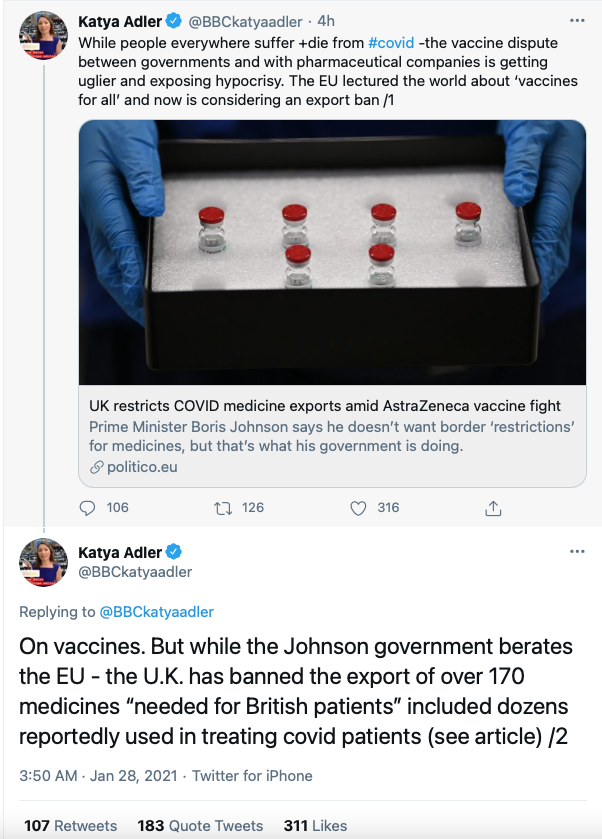