Surely everyone can see that Russia has a legitimate point over #fakenews at the ghastly Daily Telegraph?

Yesterday I made the mistake of pointing out that when Ukraine’s President and his fellow leaders of the second most corrupt country in Europe (after Russia) said that a Russian missile had hit Poland, killing two Poles, and that NATO must collectively respond, this was a lie. Not just any old lie but a lie that could have lead to World War Three so a rather dangerous one. Naturally, on twitter and elsewhere, folks responded by saying that I must be a Putin apologist, supporting Russia’s invasion and it shooting down an airliner in 2014.  Of course, I am not an apologist and I do not support either, wholly unwarranted, military action. But that sort of smear is what happens when you write facts exposing folks who are lying in 2022. It is what always happens when you are not part of the GroupThink. The wretched Daily Telegraph, one upon a time a half decent newspaper, is now part of the GroupThink…

At the time it went to press on Wednesday, there were already images of the missile on the internet with experts saying that a missile of this sort could not have reached Poland from Russia. It must therefore have been Ukraainian but the Telegraph did not bother checking it just repeated the lies of President Zelensky and others.

So the tweet from the Russian Embassy in London is bang on the money. It is 100% accurate. In pointing that out I will no doubt be tarrred as a Putin apologist, etc, etc. Update, twitter dervish Jonathan Price has tarred me as a Putin apologist on the basis of this article. It only took a few hours.

“The further a society drifts from the truth, the more it will hate those that speak it“. George Orwell. 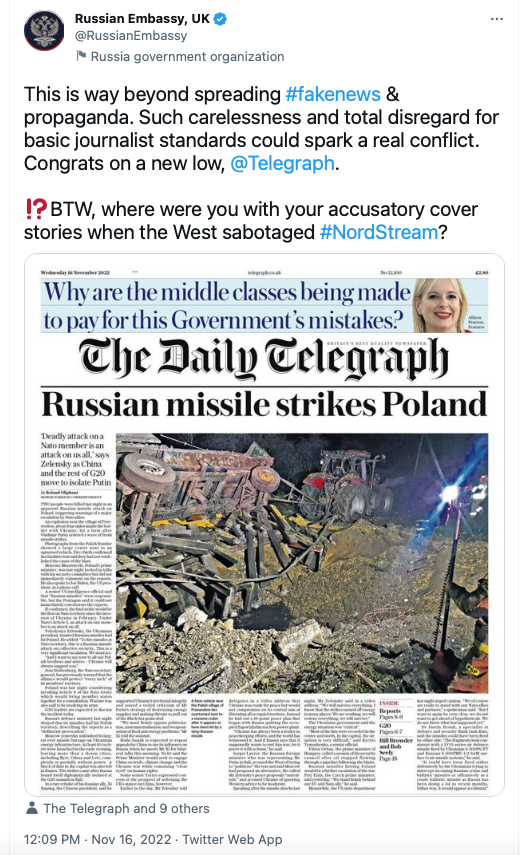