Less than half Cambridge students are straight screams the Daily Mail... of course its all cobblers

I always thought the Tabs were a bit queer but further down this article in the Mail is a survey suggesting that less than half of Oxford Students are straight so has Oxbridge been over-run with gay folk? Quite obviously the answer is no and this is another sensationalist load of cobbers from the wretched Mail. The stats in the Cambridge survey were: straight 49.7%, gay 11.9%, bisexual 29.7% and other 8.7%. In Oxford 49% were straight 33% bi and the other 17% gay or other.  However…

Firstly those who read Varsity in Cambridge and Cherwell in Oxford are not representitive of the wider campus. There are more politicos, drama hacks, woke warriors and wannabee media folks than dull academics or rugger hearties. So these small surveys are not representitive. That is not the main critique.

When I was at Oxford most gays were in the closet. It was a time of AIDS and Clause 28. But these days here is no stigma at all in being gay, people just are. In fact it is rather trendy as I will discuss later with regard to the burgeoning “bisexual community.” Hence, while a few of those replying “other” in Cambridge might be trans most, like those describing their sexuality as “rower” are, I suspect, straight folk just bored by a society where we celebrate LGBT related days weeks and months for 109 days a year, 2.7% of the wider population get 29.7% of the days.

So already it is pretty obvious that more than half of the Oxbridge students are bravely coming out as proud heterosexuals even in this skewed survey.

Then there are the bisexuals who in wider society are a tiny minority (1.6%). But on Madrassas across the West there is a growing narrative that if you don’t admit that in certain circumastances that you could be attracted to someone of your own gender you are either a bigot or in denial. So the socially progressive stance is to say that you are bisexual. Survey after survey has shown that nearly all folks identifying as bi were in relationships with someone of the opposite gender. This one from 2015 found only 9% of bisexuals who were in committed relationships were in one with somebody of the same gender. But since then the number of real bisexuals has been swamped by the faux woke bis so that 9% number will surely be even lower these days.

Incidentally tracking surveys in the UK show that even among young folk the numbers of L&G folks is not growing in a meaningful way but the young LGBT community is being boosted by large numbers of Bs. Fear not in a decade’s time nearly all of 2022 Bs will be married to someone of the opposite gender railing, as I do , like the other boring straight parents against the Welsh Government’s new plans for teaching three year olds about LGBT rights.

I am prettty sure that some of those identifying as G or B at Oxbridge are merely virtue signalling and will end up as boring straights far sooner than they think. But I can’t prove it.

What you can say without doubt is that a majority of Oxbridge students are straight and that the vast majority are either in a relationship with someone of the opposite gender or, if they are doing a degree such as computer studies would like to be. Far be it from me to spike a sensationalist load of bollocks in the Daily Mail but that is what it is. 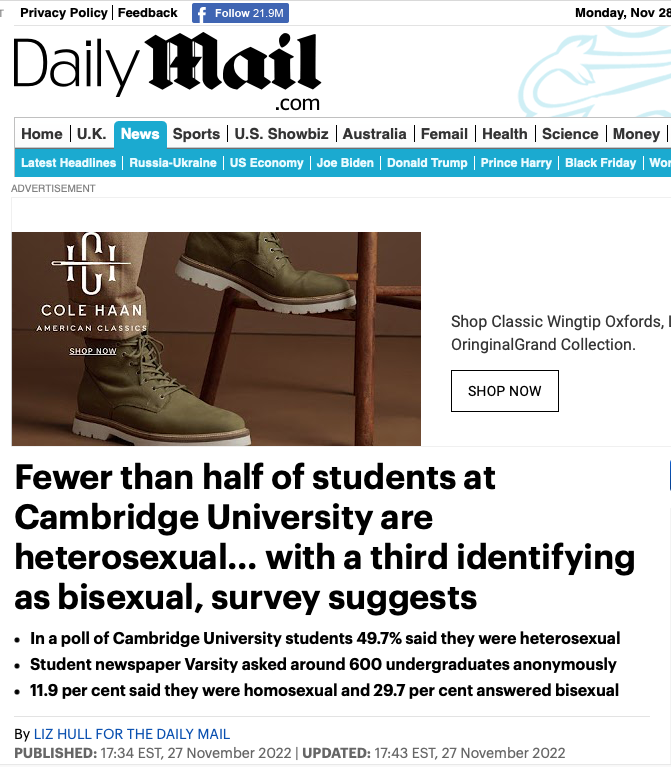