Photo Article: Oakley the cat is not playing Pokemon

Our friend M popped by last night for an amazing supper prepared by yours truly. The roast chicken stuffed with lemon and ginger really was superb. I would be modest about my culinary skills but it is hard to find anything to be modest about. The strawberry and dessert gooseberry crumble was almost magical. It was almost a perfect 10. I digress. M has in the space of seven days become addicted to Pokemon.

She now logs onto the app one hundred times a day. Morning noon and night she is at it. With great excitement she described how one could buy food for your Pokemon or go fight other players in a virtual sense at the Pokemon gym.

As she explained the joys of her new addiction with the enthusiasm a drug addict would display on news that the Candy man had arrived, it was one of those moments when I despaired of the modern world completely and wished that I was back at the Greek Hovel chatting only to the Shepherd, him speaking Greek and me English and neither understanding each other.

But at least I think the Shepherd and I are roughly on the same page. I am sure that we can both agree that Pokemon is pointless and that milking a sheep is not. Chatting to a Pokemon player is, I imagine, like trying to converse with a Martian or a dolphin.

just do not get it. Nor does Oakley, my morbidly obese three legged cat. As you can see there was a Pokemon in the room above his head. Quite rightly the old boy was just not interested treating it, as you can see below, with the disdain it deserves. 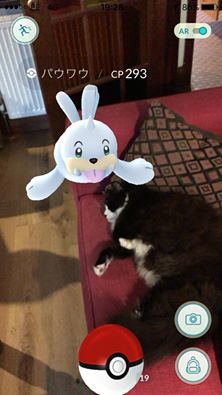