Out in Colombia a referendum on whether a peace treaty between the State and the loathsome murderers of the Maoist terror group FARC should be ratified has just seen the great unwashed vote the wrong way. It seems that the oiks were not so keen on an amnesty for the butchers and so voted in a way that the liberal intelligentsia across the world do not understand. it is Brexit all over again, why can't the lower classes do what is good for them, wails the elite. Meet academic Caroline Dodds Pennock from Sheffield University. She won't like me posting her photo but since you, the taxpayer, have been paying her wages since she graduated from Oxford you have a right to know how she thinks. 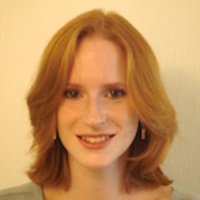 Caroline who is a historian but is a whizz at Women's studies as well caught my eye with the tweet below. Why I am not surprised that she reads the Guardian? 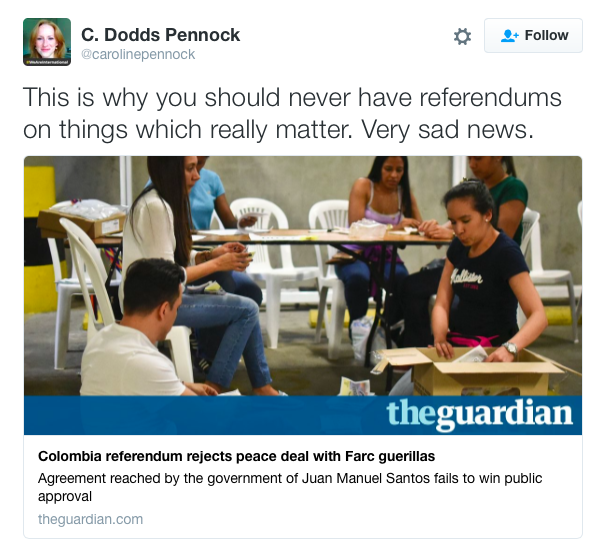 This is outrageous. Caroline really appears to think that the stupid peasants should only be allowed a direct democratic voice on things that do not matter. They simply cannot be trusted with important issues. I countered this with a comment about what a patronising remark that was to which she countered Of course I believe in democracy, but I see nothing wrong with really big issues going to the whole electorate. I am happy to accept the collective wisdom of my peers. And irrespective of where we were educated or what job we do, when it comes to democracy, everyone is your peer - all mankind stands equal.

Ideally all folks would vote on everything, in the spirit of true democracy, that is to say rule by the people. I would love to cut out the wastrels and expenses fiddlers who sit in Parliament, as often as not thwarting the desires of those that they are meant to represent while costing an arm and a leg. Cut out the middle man and you cut out the politics of pork belly as well as the porkers themselves. I accept that sometimes the people would vote in a way I'd disagree with but I think my fellow man has a right to decide his own future.

Caroline's assertion that because I support referenda means I don't support representative democracy is just silly.  In the absence of a move to use modern technology to cut out the middle man I am happy to leave most decisions to the expenses fiddlers but big ones must be decided by the people directly. The left used to think this way too. It was Labour that pushed through plebiscites on the EU and Scotland in the 1970s. It is only now that the left is losing such votes that some of the comrades are forced to dismiss the views of the "lower orders"in such a patronising fashion.

De Toqueville and, later, Mill were right to warn of the tyranny of the majority and there needs to be institutional safeguards to prevent that. But ultimately I believe in the rights of my fellow man (and woman) to decide his or her future. But Caroline and her ilk have been bruised by Brexit and are thus now terrified of the popular will and so want to emasculate it via parliamentary democracy unless the issue is one that does not really matter. The liberal elite will pretend they are democrats and offer a sop to the masses by allowing them to decide on trivial matters such as whether their district should have a directly elected Mayor, but things that matter must be left to the "grown ups".

I am outraged at how patronising those with comfortable, well paid jobs such as academics who do some moonlighting with the BBC seek to lecture those whose existences are far more challenging about how we should all live our lives on the basis that the top few percent really "do know best". With Brexit, with the rise of Trump and in Colombia we "little people" are saying that "enough is enough". Caroline and I had a heated twitter exchange. She tweeted that I was a "former journalist" and disparaged me professionally. As a, very much, current journalist after 24 years, one month and two days in the game I said I would write an article and wanting to put in a bit of colour on this establishment figure asked which school she went to before attending Corpus Christi Oxford.

Of course I went to Oxford too. I accept that I am from a reasonably privileged background but I do not lecture those less privileged with an insistence that they are not smart enough to decide their own future, I leave that to Caroline. With her career smears against me Caroline gave as good as she got even if she had to resort to made up facts. It is a free world and she does seem to believe in free speech. But the reaction of her pals was instructive. Not only do the liberal left not like "the little people" having a democratic voice, they do not like those they disagree with enjoying free speech. Free speech is only for those who think the "right way"

Meet Fern Riddell who teaches history at Kings College London and has also appeared regularly on TV. Her thesis was on Vice and Virtue: Pleasure, Morality and Sin in London's Music Halls 1850-1939. In precis:

Using the theatrical space of the music halls as a prism for social investigation, this thesis explores how the stage was used to transmit and negotiate ideas of sexuality and social control from 1850-1939. Beginning with the development of urban understanding in the acts and songs of the male comic singers, to the militant feminist expressions of the suffragette stars, Fern is exploring how the music halls existed in a state of constant flux: as a place of radical political expression, and also conservative reinforcement. The main case study of the thesis is the incredible life of Kitty Marion, Militant Suffragette and Music Hall Star.

More of my taxes well spent I see. Anyhow Fern does not reckon that I should be publishing articles giving my viewpoint on the remarks made on twitter by her friend. If I had said this on her campus I would be censored as all the millennials rushed to the safe room for save haven. But I am not an academic, I am a journalist. So, on trumped up charges she wants twitter to ban me instead.