BBC stalwart Jon Sopel, whose #TrumpDerangementSyndrome is particularly acute: you cannot be serious

The impeachment of Donald Trump will soon draw to a close having been a farce from the outset. The same sort of folks who said that POTUS would have to be impeached and found guilty over Russian collusion, only for that to be dropped as there was zero evidence, then impeached him on Ukranian matters without producing one single witness with first hand evidence. Hearsay from often dubuious sources, will never score a conviction. But if you listened to the BBC’s North American correspondent Jon Sopel, who has an incredibly severe case of #TrumpderangementSyndrome, none of this would be apparent.

Sopel will try to spin Trump’s acquital as a disaster for the Republicans. In reality it is the Dems who are looking daft from prosecuting such a spurious case and a GOP victory in November’s General Election looks increasingly likely.  Trump will win, the Senate will stay firmly Republican and don’t bet against the House reverting to GOP control either. Sopel is partisan and makes no attempt to hide it. In his defence he does not tell slam dunk lies in his fake news coverage like hs colleagues covering Brexit who claimed that Parliament Square has only a thousand folks celebrating on January 31.

But it seems that Sopel reckons that BBC reporters need more freedom to give their opinions. If I want that sort of thing I can buy the Guardian, that is my choice. but having to pay Sopel’s bloated salary via the license fee is not a choice for me, I have to do it or risk jail. The case for privatising Pravda grows stronger by the day. 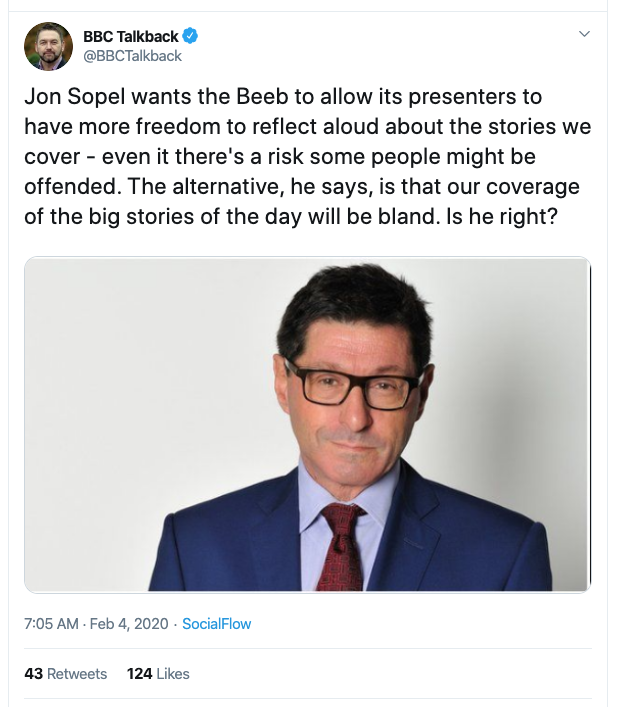