The Greek Hovel August 2020 day 1: The Coming out photo of the Mrs as we head straight for the Kourounis Taverna

No this is not, as a former Indian girlfriend would have said, the Mrs announcing that she bats for Pakistan. This is about generating a photo for her Facebook page which shows that she is pregnant. Well there you go… 25 weeks now. Apparently some folks did not know! I digress. Rather than head up to the hovel, our first stop in Greece – after the snake repellant store in Kalamata – was at the Kourounis taverna run by lovely Eleni. There is bad news in that there is another new restaurant in town to tempt away trade already impacted by Coronavirus but that story can wait for another day.

Eleni says she is not so wiorried about the virus for herself and so sometimes she wears one of those see-through masks. But more often she does not. Her husband Nicho does not, but perhaps should to hide the first signs of grey in his beard, and neither do the other two staff. Eleni is a bit worried about her 83 year old mother-in-law but she does not wear a mask at all when she helps out in the taverna. You may remember that, at olive harvest time, the mother-in-law is dropped off up the mountains to get on with it. She is in better nick than you or I and most folks in their sixties or seventies but I know what Eleni means.

Greek salads, meatballs and coke followed and we bought a few groceries and headed towards our car. On the way, I bumped into the chap who runs what was Mirandas. He was wearing a face nappy but stretched out his arm and we shook hands. That was my first hand shake in months but pretty soon I’d shook a couple more hands. I do not offer lest they recoil at contact with someone from the Corona hotspot that is Britain. But when a hand is offered, as it was by my friends Nicho the Communist and Vangelis, I do not refuse.

At Mirandas, two female staff wear no mask, one wears one but at half mast. The local mini-market has a stern notice about wearing face nappies on the door and its staff are all masked up. The Mrs was far from the only customer to ignore the signs completely. Yes there is a bit of fear here in Kambos; everywhere is less full than it should be. This is not a tourist village so it is not just foreigners cowering at home but Greeks too. However, it seems that Greece has not had its version of Professor Pantsdown of Imperial telling the bubbles that they are all going to die of Covid. There is no paranoia and no mask zealots encountered so far. Indeed very few villagers wear one at all.

Perhaps it is just that years of either active or passive smoking on an industrial scale has made this village Corona resistent. 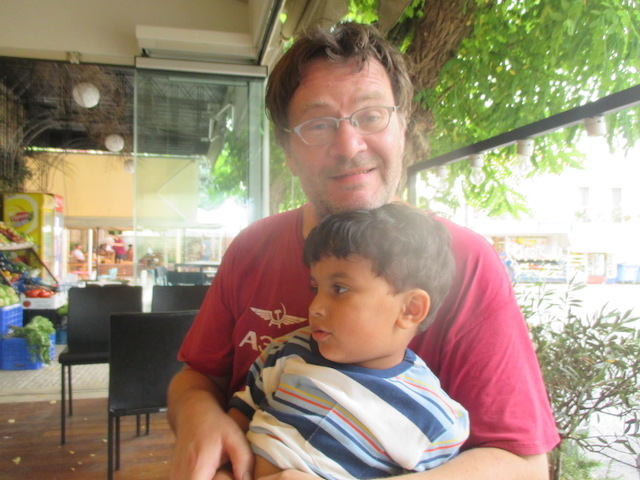