Britain’s Police forces are increasingly drunk on the new lockdown powers they have been given by our airhead, but authoritarian, Home Secretary Priti Patel. My family and I managed to break five of her daft laws today with acts that have seen fines handed out by cops from various forces in recent days, such as sitting on a bench or drinking a cup of coffee, without the Rozzers catching us. But some poor sap from Bristol was not so lucky. His crime is shocking.

He drove the 20 miles from Bristol to Cheddar Gorge and then, alone in his car, he sat and ate a kebab. Oh shite. That really is a covid super-spreading incident. Not only did Avon & Somerset’s finest fine him £100 but they then boasted about it on twitter.

Yes the cops are blundering idiots but they act in this way because folks like Patel and Matt Hancock egg them on. 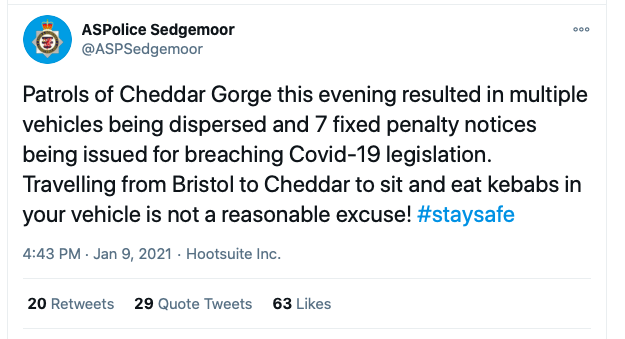