The BBC’s Panorama recognised which journalist exposed the disgraced fund manager Neil Woodford from 2015 onwards with more than 1000 articles, podcasts and videos. When I confronted Woodford at his AGM in May 2019, he signalled me out as the journalist who had been most “wrong” about him. Within 3 weeks his funds had been gated – as I predicted. Woodford made £40 million from the venture, tens of thousands of ordinary savers lost billions. I had been right while Fleet Street blew Woodford off almost to the end. The FCA is now looking into Woodford but 20 months later the disgraced fund manager is plotting a comeback. How do we know? The Sunday Telegraph had the scoop. This is corrupt journalism that shames our profession.

The deal that Lucy Burton of the Sunday Telegraph struck was that she got the scoop of his comeback in return for Woodford doing a full interview where he lied about what had happened and was allowed to paint himself as the victim. And Lucy could not or did not challenge him or point out the lies he was telling. That is corrupt journalism and I railed against it yesterday dissecting all of Woodford’s lies and reminding folks what really went on here. Few can argue that I am not the most qualified journalist to undertake such a dissection and to call out Woodford. After all, nearly every other journalist blew smoke up Woodford’s posterior for years even as I exposed him. Some like those on the Mail on Sunday were telling their poor readers to put cash into his funds less than 24 hours before they were gated.  But the Mail on Sunday’s Jeff Presstrip always had a hot line to “exclusive chats” with Woodford. For scoops, Woodford bought support and a defence of the indefensible. That too is corrupt journalism.

In my article yesterday, I point out other very recent examples of this corruption in the financial press at the Mail on Sunday and Sky, the way that PR folks dictate what is run as supposedly objective journalism.  It is a cancer and it needs exposing and as someone who has earned his living as a journalist for most of the past 30 years, that is being paid to write, and having witnessed this corruption first hand, I am well qualified to call it out.

But as you can see below, Paul Kendall of the Telegraph, blue tick so must be a trusted source, hit back. You may remember that my Uncle Christopher Booker wrote for the Sun Tel for decades and was nothing if not a global warming denier but apparently at the Torygraph these days that is a term of abuse. Anyone who does not follow the bogus religion of Greta, Princess Nut Nuts and Boris Johnson is not entitled to a view on anything. And am I a blogger? I would argue not. I am a journalist in that I am paid to write articles and as Woodford, Quindell, Globo, etc etc etc showed a damn good one when it comes to exposing fraud. But I do not work for a paper so folks like Kendall smear “blogger” and somehow think that stops me commenting on anything with any authority even when, in the case of Woodford, I am the leading expert on the matter!

Could I once again work for a paper? I doubt any would hire me but, as importantly, I’d just not do it. In my world of finance, newspapers do not expose fraud and miscreants but they seem happy to promote the endeavours of such folk. Their journalists are, as I noted here – as it happens with reference to the Teldegraph – yesterday, too often dim and unthinking.  Newspapers and the culture that Kendall seems happy to defend are not a check on the powerful as the 4th Estate should be but are part of a problem of endemic cronyism and corruption which is dragging this country down. And so I take the slur from someone like Kendall as a compliment as he is defending something most of us find nauseating.

Perhaps that is why the publications I edit seem to be gaining subscribers while the Telegraph, staffed as it is with poltroons such as Kendall, is losing them? 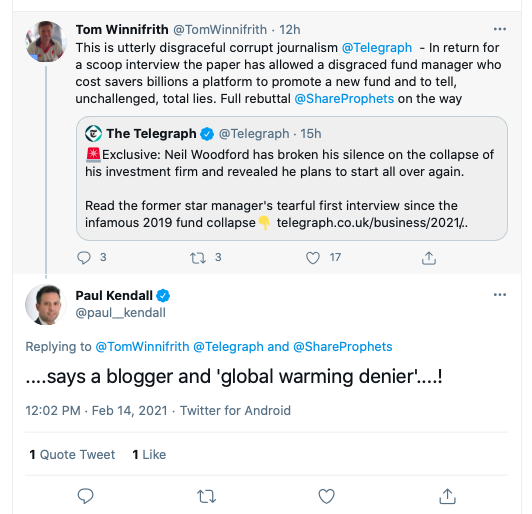