Now my woke friends here is your 3 part Pride Month in the Middle East quiz!

On campuses across the UK, the woke mobs are still chanting “Free Palestine”. The BBC still employs Tala Halawa, a woman who think Hitler got it right with regard to the Jews, on its Middle East team. For the snowflake generation, the two great demons remain Israel and those who do not celebrate all things diverse with regard to the LGBT Community. So for the woke generation, here is a three-part quiz on Pride Month in the Middle East?

1. How many public Pride celebrations will take place in Gaza this year?

2. How many public Pride demonstrations will take place in Egypt, Jordan, Syria, Iran, Saudi, the Gulf States and Iraq? Hint, it is the same number in all of them.

3. In which evil, bigoted, repressive country you folks often compare to South Africa of old or even Nazi Germany is the massive Pride demonstration below taking place? Hint, it is a country where there are no anti gay laws at all and where gay marriages are recognised.

As a tie break, Section 152 of the Penal Code applicable in Gaza criminalizes consensual what and makes it punishable by up to 10 years’ imprisonment?

Answers on a postcard to Google’s head of Diversity, until he was given a sideways move not fired as he should have been, Kamau Bobb who said that Jews have “an insatiable appetite for war and killing” — and an “insensitivity” to people’s suffering. 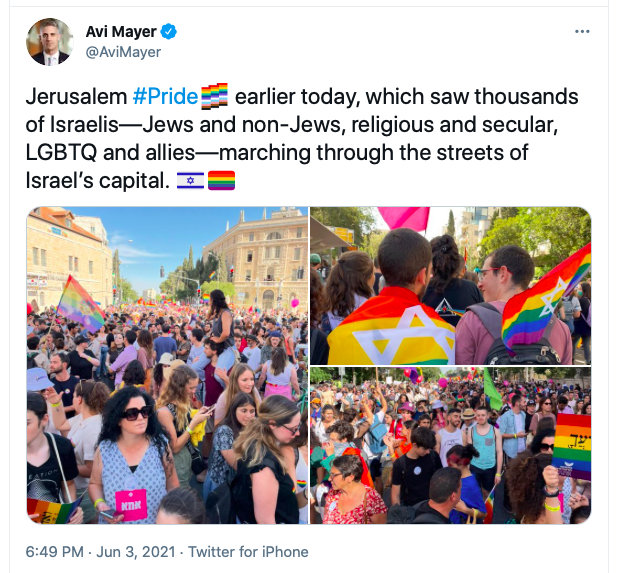