It stopped raining by eight and by nine it was dry enough to put the mats down and go into battle. Heroic harvester K from a couple of years ago would have been proud of me. I worked out how to charge the battery and get the twerker working, to lay out the mats and we kicked off on the six trees nearest the house where my special man fertilizer seems to have ensured there is a decent crop. My business partner Nicho the Communist has again warned me that he will kill me if I chop any branches so it was twerking only. Well I say that..

One of the trees is a small one perched on a rock overlooking the pool. There is no way that you can lay mats around it so I got my saw out and chopped off a few branches. I have continued branch chopping on trees that are either inaccessible, such as the one by my wire fence where I once met a snake. Or for far too many of the trees where there is just one branch with fruit. There is no point dragging mats down over what are now wet and slippery terraces so I just chop the odd branch. Sadly many of the trees have zero olives so I hope Nicho inspects them.

You can see below, R mastering the twerker and R&S emptying a full net to take it to the sieve, also pictured, and finally the trees we were tackling yesterday. 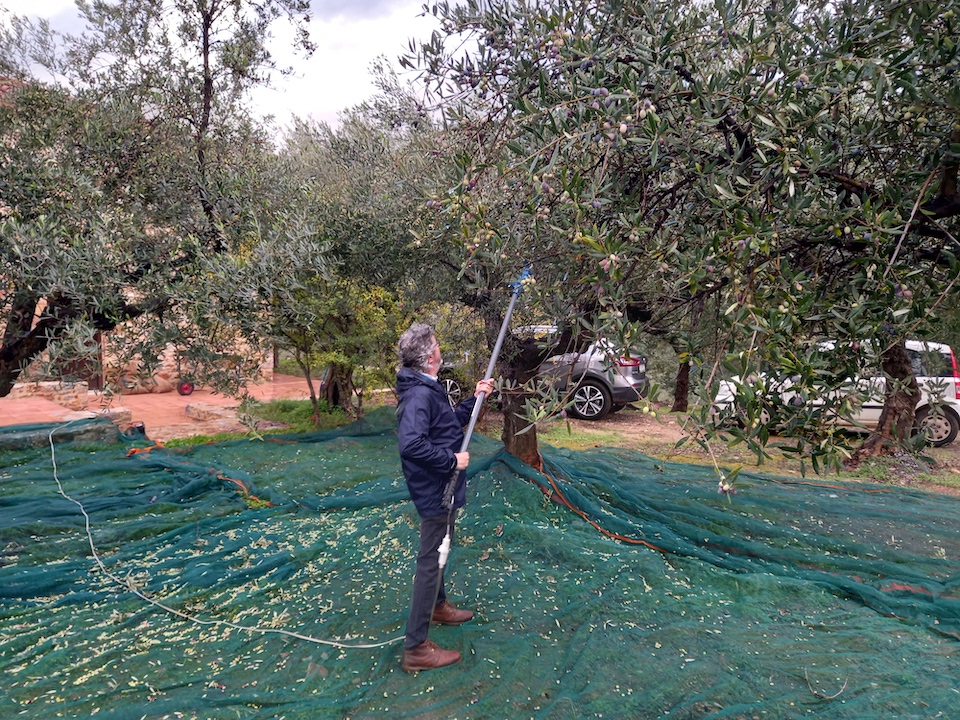 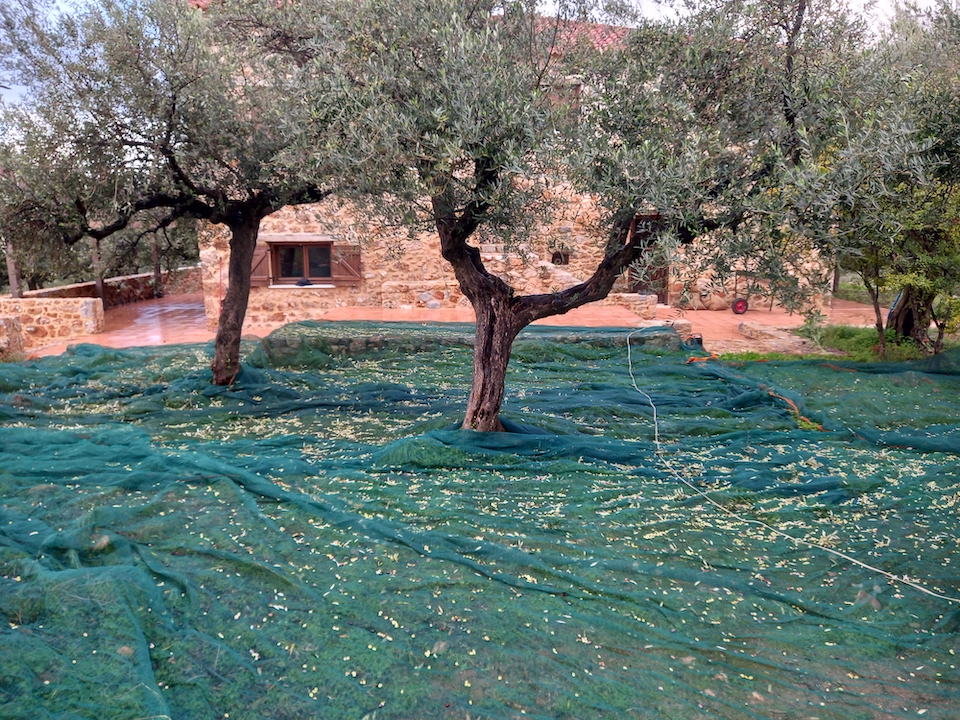 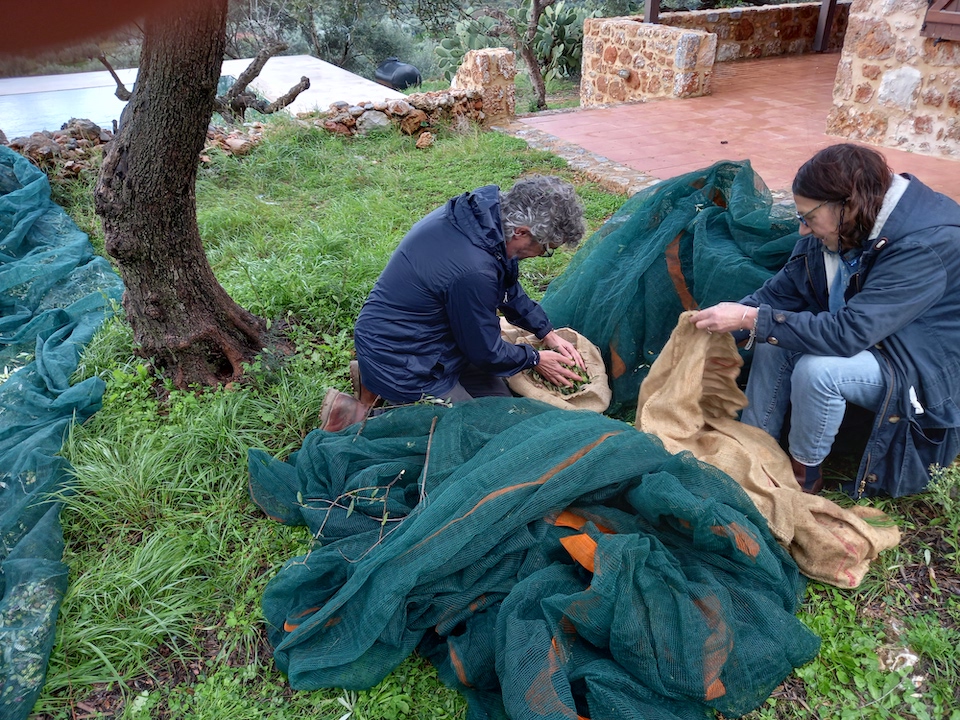 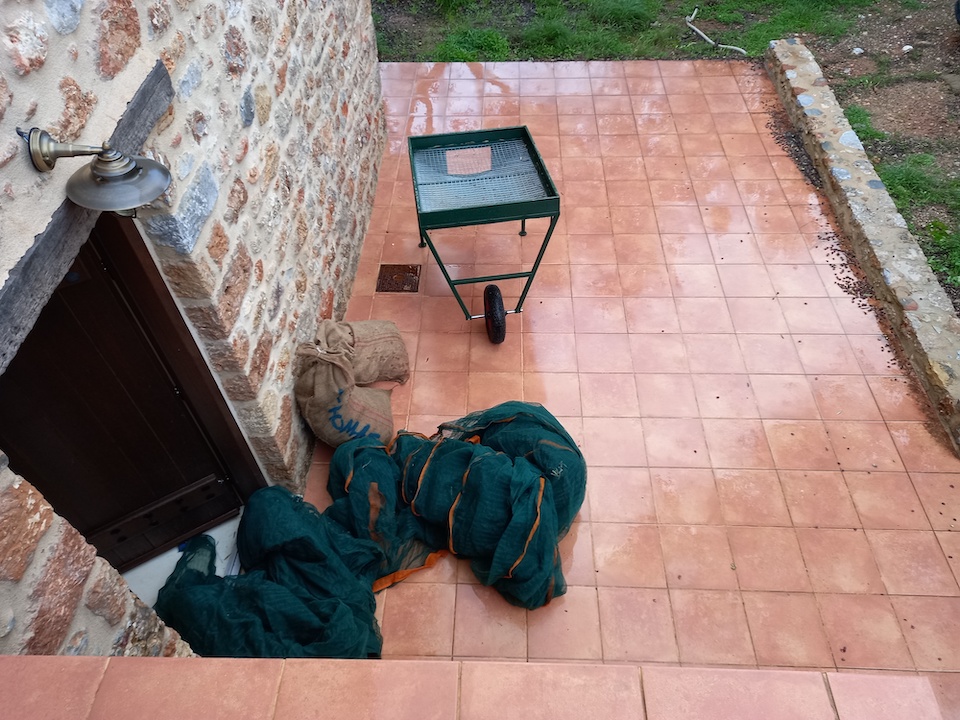 The division of labour is that S removes olives from branches that are chopped and also when we empty nets into the sieving machine, she removes leaves and twigs and sieves away. I should say that she also dashed off to get needle and thread when she saw holes in mats and stitched them up with incredible speed. She also makes mugs of tea.  She can come again. We worked in periods of T-shirt sunshine and in periods of modest rain. There was a break for lunch in Kambos where lovely Eleni assured R that her mushroom pie had no meat in it.  After a while R discovered that for the first time in his life he’d eaten ham but I have promised not to tell his Rabbi.

In the evening I headed to Kalamata as it tipped it down and picked up harvester number 4, B who actually speaks some Greek. He is a burly fellow and will come in useful when we have to lag heavy bags for by the end of day 1(Monday) we had four and a half bags which, when decanted, will make almost three 50 kg bags.

And so to what was Miranda’s for supper. At the next table Nicho the Communist, Vangelis and three other men were in fine form and the Tsipero was flowing at an alarming pace. We were asked how many bags? I said 4. Nicho said that was good and everyone laughed. I explained that we did not want to do too many as we were saving olives for B who had only just arrived. I fear they were unconvinced.

Still recovering from Sunday’s intake, I joined R on the water while S and B drank enthusiastically. But then disaster, we were bought more wine and a beer for B by the next table.  Nicho the Communist asked if I was not drinking with a look of real concern on his face. It is bad enough that I don’t own a gun and we only picked four bags, my good standing was already in some danger so  I picked up a wine glass and had a couple of very small glasses.  Naturally I returned the compliment and bought a bottle of Tsipero for Nicho’s table at which point they then sent back more wine and a beer.

The admirable S hid the wine in her handbag, B was told he had to drink the beer which did not seem to upset him that much as you need three bottles of beer as chasers for the three ouzos he had enjoyed earlier and then we headed to the Kourounis for a coffee before things got out of hand. Unfortunately we had forgotten that it was St Nicholas Day when good children here get presents and so lovely Eleni was about to shut up shop for the night.  And so we headed back to the hovel along a track which is becoming more muddy and puddle strewn by the day.

Plans were made to hide the evidence of saw usage should Nicho pay us a visit. If such a visit happens after Thursday R&S will be on their way back to England so it is agreed that I shall say that S grabbed the saw and was unstoppable. Women… he will buy that one I am sure. But as a precaution bonfires are also planned though in this rain that is easier said than done.