The FT, the BBC and the rest of the political and media class warned explicitly that Sweden was heading for disaster with its relatively relaxed approach to Covid. The bodies would pile up inMalmo and Stockholm. Instead those in the GroupThink bubble lavished praise on Austria whose draconian lockdown, suppression of dissidents and crushing of civil liberties and its economy, would have made its most famous son proud. Austria was the posterboy for lockdown. So if the GroupThink crowd were right and folks like me were wrong, Sweden would have suffered far more covid deaths than Austria: right?

Before you say that we are comparing apples with pears we are not.  We are really comparing two different sorts of apples.  The population size is similar at 10.4 million in Sweden compared to 9.1million in Austria. In Sweden’s favour is a slightly lower median age but Swedes are a bit more obese and is actually a bit more urbanised so allowing more rapid spread. It is swings and roundabouts but overall the two countries are demographically very similar.

Thus if the GroupThink folks were right Sweden would have seen many more deaths from Covid than Austria. But as the chart below shows that is not the case. In fact Austria is now ahead of Sweden and while its deaths are surging, those in Sweden continue to flatline. So while Austria has had all the collateral damage of lockdown and Sweden has not, there have been no benefits at all from its policies.

This is yet more data showing that the approach in the UK of Chris Whitty, Jonathan Van Tam, Jenny Harries, SAGE et al was just wrong. Instead of being knighted they should, as I demonstrated yesterday, be on trial for murder.

Indeed for those who still believe the lies of Whitty et al here is a research paper looking at the efficacy of 400 covid control policies from masks to lockdowns. The mask jihadists in my home village here in lockdown Wales and elsewhere will ignore it of course. The deadwood press and wretched BBC will not report it. What are facts and hard data in Airstrip One? Let’s just go along with what the Ministry of Truth wants us to believe. The conclusion: the controls do nothing to reduce transmission or cut deaths. 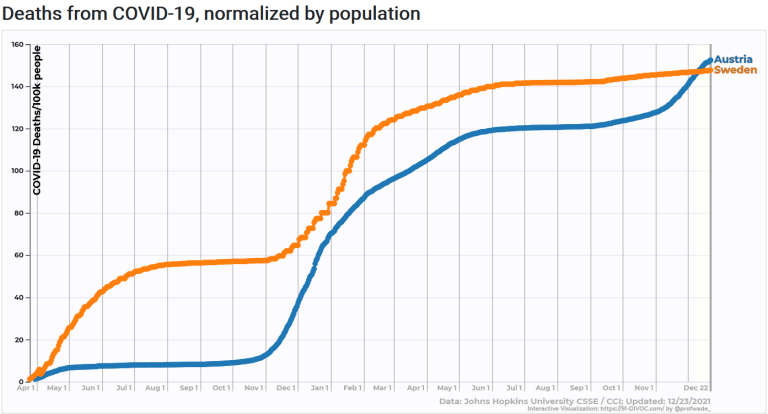