Justin Trudeau - a smear of his own people, the #TruckersConvoy2022

This week, 50,000 truckers headed in a convey to Ottawa, the Truckers for Freedom. All along the route, Canadians braved minus temperatures and driving snow to wave flags and shout their support.  Prime Minister Trudeau claimed he had met someone with covid and so self-isolated in a hidden bunker. Almost the entire population of Canada, with the exception of my best man the deranged socialist Darren Atwater who has offered “Ol’ blackface” sanctuary at his log cabin in the woods, is revolted by Trudeau. So tweeting from his hideout how does little Justin describe the truckers, and in effect most Canadians?

You guessed it. Words fail me. Trudeau is starting to make our the First Minister here in Wales, Mad Mark Drakeford, hitherto widely acknowledged as the biggest poltroon in Christendom, look like a towering statesman in the mould of Churchill.

The truckers and most Canadians loathe Trudeau. So they must be racist becuase he wears blackface to parties? And homophobic because Justin thinks he is good at dancing? Truly there is no evidence for Trudeau’s claims, it is just a version of the snowflake standard putdown: “you disagree with me so you are a Nazi.” 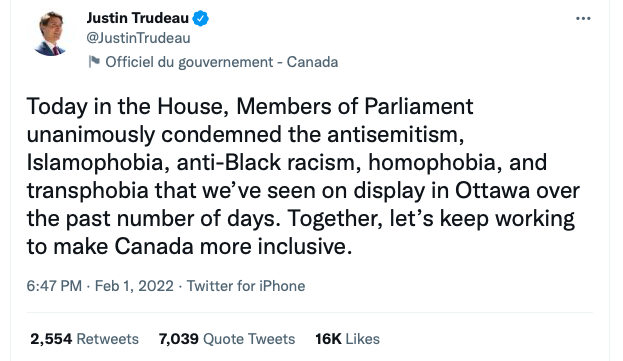