At the last election, the Tories told us that they would not spend too much as they knew who would have to pay for it in the end and that they recognised that it was the private sector which created jobs. If we wanted to go down a different route then we could vote for the money tree believers of the Labour party or, here in Wales, for the cottage burning lunatics of Plaid Cymru. We had a choice. And so today…

The Welsh Tories boast of a £1.3 billion handout for Wales from generous Rishi Sunak. But it is not Rishi’s cash that is being handed out, it is taxpayer’s cash. Thanks Rishi for sending some of my money back to Wales for that poltroon Mark Drakeford to spend. Frankly, I’d rather spent it myself than trust it to a man who is obviously insane.

We will pay for it in the end. Then these poltroons argue that Government spending will grow the economy and support businesses. Where to start. Maggie would have said that you grow the economy not with handouts because “the problem with socialists is that eventually they run out of other people’s money“. What Welsh businesses need to create jobs and grow the economy is for the Government to do less, to allow them to operate as normal as lockdowns do not work. And also not to be disincentivised to invest in new plant, stock and employees by the promise of tax rises to come.

Can the wretched Welsh Tories please explain exactly why I should bother to vote for them ever again when they offer absolutely nothing different to the socialists or the cottage burners? 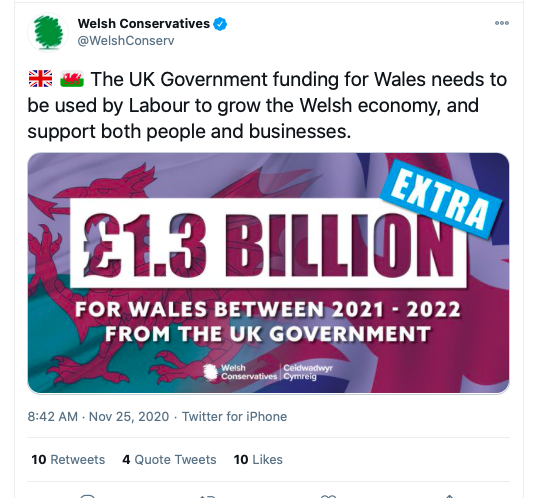