Photo Article from the Welsh Hovel: building up sandbag defences as floods rise and as Police call 7 times

The first call was mid-morning. On that occasion it was two young WPCs. If one was a filthy old man with a thing about uniforms it would have been a bit of a treat but my initial concern was that someone had read my writings about my crime family flouting daft lockdown laws on my birthday and snitched. Oh no. It was about the floods – the two young ladies just asked if there was anything they could do for me. Well since you mention it officers…

There was not. We were fine. At that point the waters had not even breached the porch to the annexe or my gardening tools rooms which will, one day, be my office. That came a bit later.  The next cop was a rather large man with a beard. He did not even leave his car but wondered if we were okay. We were. The third were a young pair, a bloke and another cute WPC. By this time the waters were rising and the chap warned me that he was being guided that they could rise another 50 cm.

I did my sums and calculated that this would have seen breaches of the house via up to four doors and the whole farmyard flooded. I said I would move both cars out of the yard and up the hill towards my new orchard. And the cops said they would get the council to deliver sandbags. And the Mrs started to panic.

Then it was a lady cop. I asked why they thought flood levels would rise as they were falling upstream and she said that the authorities were preparing to release water from lake Bala, hence the alert. I started to panic a bit.

The lady cop revisited me and then visit six was half a dozen policemen who formed a chain from a council lorry dropping off 40 sand bags at my front door. I used them plus bags of builders sand and other materials I found stored in what will, one day, be the chicken barn, the one at the top of the yard. The result, as you can see below, is a wall 50 cm high in front of the main door to the house. That left it 60 cm above what was then the water level.  Other bags were deployed in protecting the annexe doors and on the back door into the garden which, at that point, was only 5 foot away from the edge of the waters.

The cats loved jumping over the wall and quickly noticed river rats swimming up the flooded courtyard in search of dry land at the end. Sian and Quincey waited for them patiently. It was all their Christmas days at once.

Having built up my defences and with the Mrs and a friend having moved valuable items upstairs, lest my defences break, I tapped away at my keyboard in the new old kitchen when suddenly there was a knock at the window behind me. I turned around so see a stack of torches shining brightly into the window. Cripes maybe these are the covid cops come to get me, I thought. It did seem a bit like the Stasi on patrol.

Wandering into the courtyard I saw about a dozen men, policemen, firemen and even a couple from the mountain rescue service all wearing those hats with torches on.  They said they wanted to check rescue points, just in case, and also to see if I was okay with them launching a boat from my land if needs be. No problems said I. They approved of my defences and we agreed that actually the water levels seemed not to be rising any more. They also said that the Bala rumour was not true. That was indeed comforting and having noted that levels at Bala had been falling all afternoon, I had been wondering about the logic of an emergency release.

Even more comforting is that just now, the Mrs and I inspected the yard and the level has actually gone down. The lake has retreated by about four foot which, I reckoned, meant that the water level had fallen by a couple of inches. Checking on the internet, I see it is down by 6 centimetres from its peak at the local measuring station. At 9.562 metres, it is still way above the previous record this century but it seems to be heading the right way. Gosh I am becoming a river Dee flooding anorak.

Of course the levels can change either way. I may not sleep that well tonight but I have some faith in the quality of my defences. I would, however, rather that they were not tested. 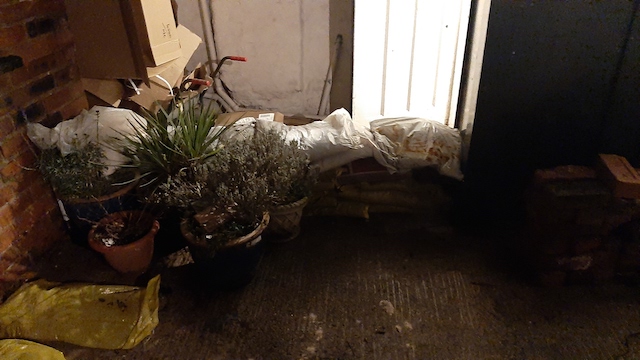 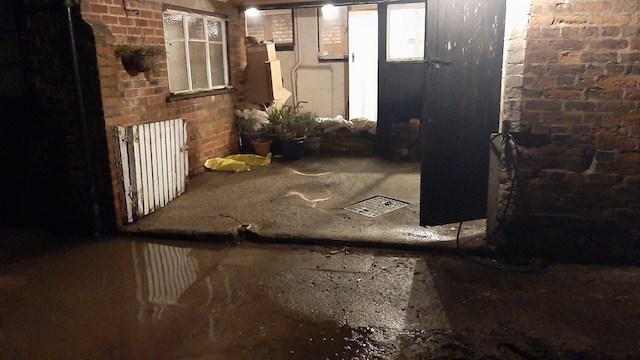