Yesterday I revealed how joining the ever longer list of things that became racist in 2021 was celebrating the life and mourning the passing of Tom Moore. Who said so? A Church of England Vicar.

Not surprisingly, Jarel Robinson-Brown, currently a Priest at Kings College London but hoping to be given his own Parish soon, received a bit of flack for the tweet below. 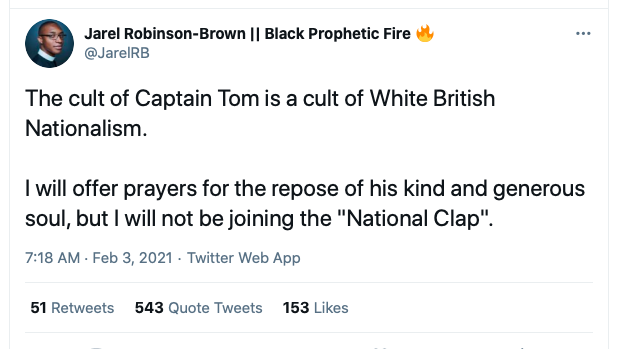 “I offer an unreserved apology for the insensitive timing and content of my tweet regarding the clap for Captain Tom. I’ve now read and will sign the Church of England’s Digital Charter:”

This is a non-apology. He has been forced to retract only because his tweet was so vile that it attracted widespread condemnation. But  Jarel is an intelligent and well educated young man and so clearly he believed what he tweeted and he should stand by it. Equally the Church of England should realise what a prick he is and defrock him.

I see that as well as race-baiting on Twitter, Jarel’s interests include ”liberation Theology and Queer Theology”. His Twitter profile shows him supporting the Black Lives Matter movement which wants, inter alia, to end the nuclear family, defund the Police, end capitalism and to boycott and sanction Israel. That extremism is why most BAME folks, let alone whites, say that BLM has increased racial division.

Jarel is entitled to his views.

Might those who are running the Church of England into the ground consider that having folks like Jarel supporting such a nest of opinions, which do not match up that well with the bible stories I teach my son and which we hear in Church, is the sort of reason why CofE attendance is collapsing?

If I want a woke sermon on my white privilege or why there are 100 genders I can watch the BBC or do a sociology degree at some Marxist madrassa we used to call a University. I used to go to Church, until its doors were locked in the most cowardly of fashion, to hear a rather different message.