Man-made carbon emissions are causing the world to get warmer and we must act now if we are to restrict that growth to 1.5% or 2.5% or whatever. So say the cultists after jetting back from COP26. These are, of course, the same cultists who warned us in 1988 that the Maldives would be under water by 2010, that within a few years of 2000 kids would ever see snow again, etc, etc, etc. We can discuss whether climate change – which has always happened – is caused by man made carbon emissions with reference to the Medieval warm period or the Maunder Minimum at another point although if you want to pass Geography GCSE these days such discussions are not recommended. Those who set the curriculum, the BBC, wretched Boris Johnson and others say that the science is settled so do not mention temperatures in 1200 or you are a vile denier one step removed from those operating the holocaust death camps. In that vein…

The other day we saw the worst snows in China since 1905. Gosh the global warming fell deeply HERE.

Now to Mother Russia where, you may remember how the BBC reported with great excitement how global warming was melting the permafrost last summer. The cost of a jet for flying out a reporter to show us all means that I am so glad I pay my license fee.

You would have thought that in the interests of balance the BBC might be sending a reporter out to Northern Russia right now. As it seems that amid horrible snows and biting cold winds, see ice is already hitting multi year highs so threatening the safety of a number of ships that are already trapped. What: the BBC has not mentioned this? You do surprise me.

The Russians, it appears, had been betting on global warming allowing more and more usage of its Northern seas but maybe they should not have believed the Doom Goblin and others as it seems her predictions are like nearly all of the predictions of the cultists. That is to say they are wrong. 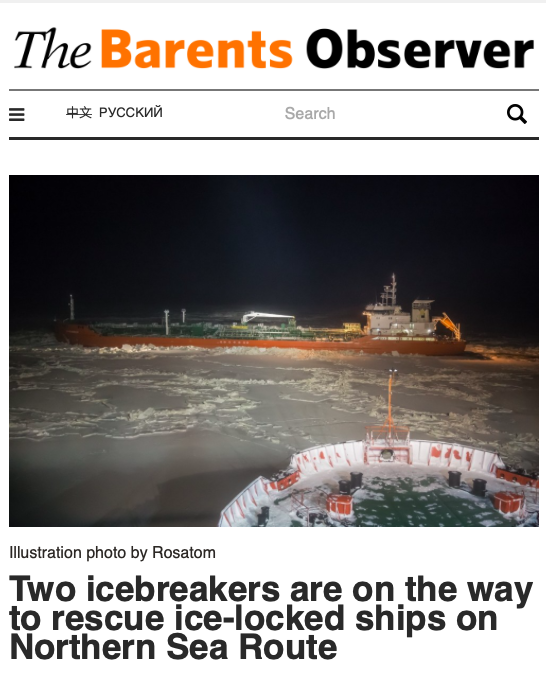