Leading Labour MP Chris Bryant, famed for posting pictures of himself in his Y Fronts on the internet touting for gay sex, knows why there was a coup in Turkey...it was all because of Brexit. It is a silly smear from a man who obviously does not know anything about history.

The modern Turkish state founded by Kemal Ataturk and others in 1923 has long seen an internal divide between those believing in secularism and democracy like Ataturk and those who wanted a more Islamist state. Ataturk was a soldier and over the past 93 years the army has been very much on the side of the secularists and progressives, frequently intervening in defence of a more liberal state.

There are those in the West who are lamenting this coup against the regime of the elected, but loathsome, Erdogan, Dodgy Dave's fascist pal. Erdogan's regime has restricted press freedom, curtailed the rights of women and gays, behaved appallingly to the Kurds, arguably committing war crimes, and has attempted to gag a free press as it moves to a less democratic Islamist state.

Hitler was elected in the same way that the Erdogan regime won at the polls. Both regimes then behaved in ways that merited their removal and I would view the actions of the Turkish military not only as utterly laudable but also as being within a long century old tradition of taking action to stop politicians from steering Turkey "off course".

This morning the coup appears to have failed and President Erdogan is promising to deal with the plotters in the most severe of ways. I am afraid we know what that means. The twisted liberal mind of Mr Bryant may welcome this outcome. As someone who does not buy into state organised executions, torture, militant islam, gay bashing, denying women's rights, gagging the press and killing Kurds I am rather less enthusiastic than Bryant about the outcome.

What is abundantly clear is that this coup is a very Turkish affair. It is the fourth such coup in sixty years and anyone who has studied the first years of the Republic for even a few minutes will know that it fits in entirely with a country specific narrative.
Mr Bryant's Brexit smear is just so silly that it does beg the question that if he is seen as a one of the more talented and thoughtful figures among Labour parliamentarians, just how stupid and talentless is "the field?"

For the twisted liberal mind, facts should not get in the way of an opportunity to smear. The only real surprise is that no-one in the liberal media has yet managed to pin the coup on Donald Trump. 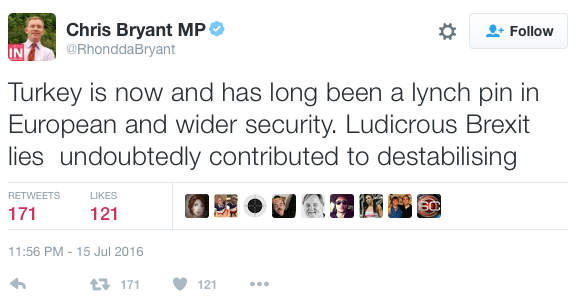