The Colombian referendum really has got the liberal elite out in force showing their contempt for the "little people" when they vote the wrong way. In the comfortable groves of academia, a haven for lazy and overpaid folks who engage in an intolerant form of group think, the sparks were flying. We have already met Dr Caroline from Sheffied University who thinks we "should never have referendums on things that really matter" now meet Scott Bellows from Durham. Scott, the Prof, tweeted: 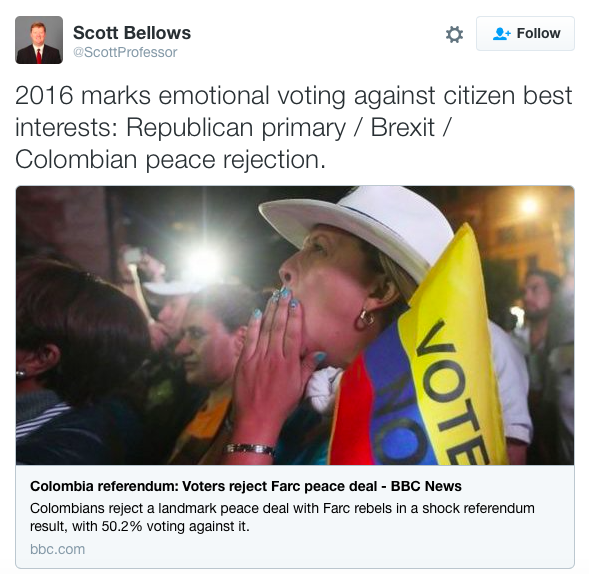 So Scott uses the BBC as his primary news source. Why does that not surprise me.

In Scott's view the great unwashed just don't know what is good for them. Of course they don't Scott. Their hard work without 15 weeks leave per annum and with no gold plated pension, pays your bloody salary but that does not mean that plebs driving white vans should have a say in public policy.

Only those folks in the top 10% of wage earners (like senior lecturers once you add in the pension benefit), folks who read the Guardian and who do not need to be told about eating five a day know what is best for society. The working classes are just fucking stupid. They just let emotions like racism, or not wanting to forgive mass murderers, or resentment of widespread de-industrialisation get in the way of making the "right choice". Right on Scott, pass the Focaccia and lets sneer at common people again.

Here is another patronising bastard from academia telling 17 million Britons that they did not understand what they needed to do to make a rational choice on June 23 and so allowed silly thoughts to get in the way. Why didn't the great unwashed read Polly Toynbee and Owen Jones in the Guardian and so vote the right way?

How Scott views the Republican primaries is even more telling. You will note that he makes no judgement about how Democrats voted in their primaries but it is only Trump (who secured 60% of the GOP vote) who is where he is as the result of emotion not logic. Most folks in the West think that selecting candidates via primaries ( that is among all supporters of a party in a given area) is a good thing. Party activists tend to be more extreme (left wing for Labour & the Dems, right wing for the Tories and the GOP) than party voters. So a primary rather than a caucus gets more mainstream candidates. The third alternative, party leaders picking a crony candidate in a smoke filled room is surely the least desirable selection method on offer.

Yet such is Scott's contempt for the ordinary voter now that he or she is voting the "wrong way", that he or she is prepared to tell the establishment where to stick it, that our comrade from Durham views a primary as a plebiscite and wants to move away from such a system. Scott wants to take power from the many ( who he despises) and give it to the few, to folks like him.

I am afraid that Donald and Caroline hold views that are far from isolated in academia today. My wife is an academic in a social studies discipline and when I listen to her friends I hear the same views. "How can the Tories have won the election, I don't know anyone who votes for them" said one in 2015. My wife, a woman of colour, has not dared say how she voted on June 23rd given the slew of facebook posts from her friends branding all Brexit supporters as racist or stupid or both. It does not cross their closed minds for a second that my wife might have voted for Brexit, as indeed she did.

Academia has no tolerance for those outside a narrow Group Think. Worse still, there is now no pretence that it does not openly despise those of us who dare to think differently. We must, by definition, be stupid to disagree with a consensus which is enforced with Stalinist brutality.