The BBC, Guardian and liberal media slate and smear Donald Trump as a Nazi - 4 more years in the bank

When Donald Trump spoke to the USA about his priorities for America, folks outside the liberal metropolitan hotpots of the coasts loved it. Crooked Hillary's waffle and re-hashing of ideas that have failed ordinary Americans did not wash and so Trump won. The liberal elites of the media still cannot accept it and so now simply content themselves with smearing POTUS at every opportunity. The more the Russia smears fail the more desperate they become and the more real Americans see through them. As the MSM tries to label Trump a Nazi, those of us who supported him in November look forward to an inevitable win in four years time. Truly the liberal left is pathetic. I start with the State funded UK broadcaster the BBC.

On its flagship Radio 4 show Today this morning the headlines were read. Trump has condemned the Neo Nazi protesters in Charlotte. Former KKK leader David Duke has supported Trump's words.

What the hell is that all about? More or less all Americans from across the spectrum might support Trump in condemning the Nazis. Why does the BBC opt for weirdo Duke a man whose past crimes include endorsing crooked Hillary in one election. Natch that was never brought up time and again as bad for her - she did not ask for his support. But if he ever agrees with Trump the media spin it as if the two are joined at the hip. Trump does not want the backing of the fruitcake Duke.

But the read through of The BBC coverage is that even when Trump is attacking Nazis he is actually backed by Nazis. It is not alone. Its sister publication the Guardian ran this headline today which claims that Trump is a Neo Nazi sympathiser. Starting in Hollywood there is a twitter campaign #ImpeachTrump for being a Nazi. Hell's teeth. 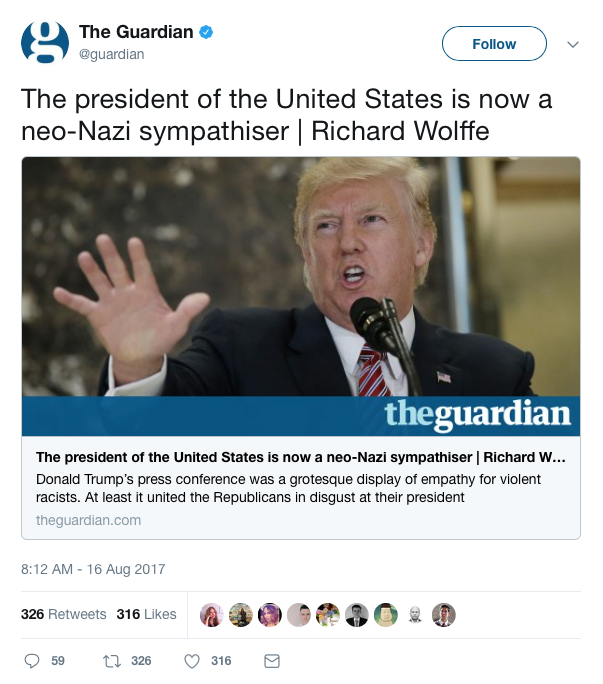 Trump's crime is to say that the actions of some of those who have protested against the Nazis but also against relics of the Confederate forces (the South) from the Civil war are disgusting too. He is not saying they are equivalent. Trump is clear that the Nazi marchers are the really bad guys. But he is 100% correct to say that those marching/ rioting. destroying property on the other side are not always Angels.

Attacking cops and looting shops is never justified. Attacking memorials to ordinary soldiers who died in any war is just wrong and offensive. The grunts of the Confederate Army were brave men fighting alongside their neighbours to protect where they lived, or at least that is how they saw it. I guess Mellennials and media luvvies do not study history so just assume that soldiers in the "rebel army" just fought becuase they hated black folks. It was a bit more complex than that, this was about States Rights versus a Federal Government on a range of issues. But for the grunts it was just about defending your homeland. Moreover,, it was very hard to opt out of the Confederate army and by the end mere boys and okd men were being thrown into the conflict. Should we not honour them, their bravey and their sacrifice?

I have spent some time in German military graveyards in Crete, Greece and Italy. There is no doubt that the men buried there were fighting for a bad cause and were on the wrong side. But they did so as folks were just enlisted and most Germans fought bravely and did not commit war crimes. I honour such men. The only folks dishonouring brave men from the US Civil War are the "anti fascists". Trump is right. Their actions are wrong.

What about pulling down statues of Southern Generals like Lee or the Johnston's? Before the civil war most of the upper ranks of the US army were filled by Southerners. So these men were trained soldiers and fought wars according to standards of their time. They were from the South and so when the call came they fought alongside their neighbours. Back in 1861 that is what folks did, they did not make an ideological decision as to whether they'd back Dixie or the forces of Lincoln. Generally they behaved with honour throughout.

Indeed, if we are to seek out those who committed war crimes against civilians it would be the Northern troops and their commanders who behaved quite appallingly after the war ended as they rampaged through the South. Snowflake protesters who know nothing of American history should perhaps do a google search for "carpetbagger"

Yet across the South today we see statues pulled down and desecrated, folks delighting in breaking them up in a way reminiscent of the way statues of Saddam were defiled after his fall. But it is not locals pulling down statues in the South but Yankees.

Let's be clear Trump believes the villains of the current peace are the Nazis, the neo-fascists. But he raises very valid questions about some of those protesting against them while making it clear there is no equivalence. Trump is right in his analysis. Folks like the Guardian, CNN and the rest of the liberal press are wilfully misinterpreting and smearing him. And ordinary folks across America can see through these increasingly desperate and laughable smears.

As I have noted so many times before, if you call everyone a Nazi then the term ceases to have a meaning. The Guardian's loathsome smears are an insult to the memories of those who died or suffered at the hands of real Nazis.

Even my metropolitan elitist colleague Darren Atwater falls into this cheap and lazy mindset. When loading the Guardian image for me he puts the headline on the piece "Trumpenfuhrer." Of course he thinks that is hilarious as will all bearded hipsters in Central London and probably the liberal multi millionaires of Hollywood too. Two of my daughter's godparents saw nearly all of their families turned into soap at Auschwitz. Maybe Darren wants to explain to them why a man who - rightly - condemns Nazis is viewed as a modern day Hitler and why that is funny?