Retweeting a tweet from a former editor of the Guardian, Gary Lineker wades into battle on behalf of the BBC which, by extorting money from us all under threat of jail,pays him£1.3 million a year for talking about sport. The crisp salesman, who made £5 million from promoting the £3 billion Quindell fraud, argues that BBC staff have a diverse range of opinions. Hmmm.

Just how many supporters of Brexit, tighter rules on immigration or of the conservative party does the BBC employ. How many of its staff would leap to the defence of JK Rowling and call out the nonsense of trans athletes competing in women’s sport? How many dare to point out the gulk in ability and crowds between women and men’s sport while demanding equal pay? How many will speak out for the benefits of capitalism? How many BBC staff have had to be investigated for anti-semitism? It is far more than have ever dared voice their support for Israel.

Amid all talk of diversity, how many working class white men does the BBC employ in £100,000+ roles. Hint: it is massively under quota.

Even today, as 4 Jews were seized by a gunman in the USA, BBC World reported that there were 4 “hostages.” The inverted commas are its not mine. It never uses inverted commas in other hostage situations yert when it is Jews staring up at a gun it suddenly does.  Jews such as Rachel Riley have been quick to pick up on this. You may say it is paranoia but after incidents such as this a few weeks ago for which the BBC still refuses to apologise, that is how many Jews feel about BBC News coverage.

Mr Lineker lives in a bubble of rich liberal Metropolitan snobs. He mixes with folks who think and live like him and who think and speak like the BBC News reporters. There is no diversity of thought among such folks. 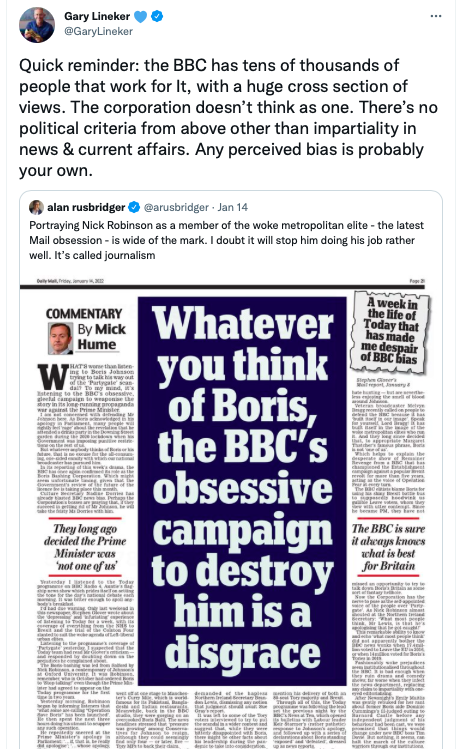